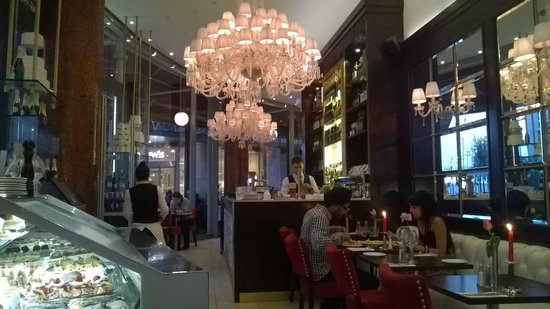 When living within striking-distance of London was still more novelty than nuisance, I used to travel into the city frequently. A favourite pause came to be the Costa Coffee bar at Liverpool Street Station. It was tucked away almost under the stairs by the entrance to the underground station. It was only small, with a glass frontage and polished granite counter piled high with all sorts of Italian goodies. Mostly, one perched on stools at a high counter in the window; as a place to pause for an espresso, it was just like a snippet of Italy dropped into the station.

Fast-forward three decades, and Costa is of course massive. It was bought from the original Italian family by Whitbread and rolled out ad nauseam across the country. To be fair, the coffee is still pretty good, but the décor was rapidly watered down into something more anodyne and cheaper to mass-produce. What we gained in ubiquity, we lost in style. The food is acceptable, but has again become less distinctive rather international-bland; various types of themed drink that have never been anywhere near Italy have been introduced. It’s pretty much a standard chain now.

Last Saturday, we travelled to Stratford to meet family who were visiting the World Athletics Championships. Hunting around a packed Westfield Centre, we couldn’t find anywhere to eat that didn’t have an hour’s queue. After running out of ideas, I eventually spotted a cafe that also had the word pasticceria over the door. Hmm: I guess not many chains – or their punters – know what one of those is. Maybe this is worth checking out – and thus we landed in Caffé Concerto.

For a new building, the fitters have done a very passable job of conjuring up a dark-wood and marble Torinese-style interior. The materials seem to be real, and the place felt right. Many of the touches that one would see in Italy, but the average theme restaurant would ignore or filter out, were there. It was no surprise that there had been at least some Italian input into the place; the Maître d’ was clearly Italian, even if most of the other (properly-attired) staff were Easterners. They appeared to have had proper training – or at least they were working somewhere where their likely exposure to proper ‘waitering’ from back home could be applied. All very impressive; and what’s more, despite the queues, there was no hustling people to move on quickly.

As for the food: my expectations always fall when one is given a laminated menu – although to be fair this happens very often on the continent too, these days. The fare was a slightly strange mix of English and Italian, with some notable omissions – no pizzas, and no pannacotta on the desert list. But there was an excellent choice of risotto and pasta dishes, much for veggies, and some correct-looking meat and fish. And one or two give-aways that these people know what they are doing, such as Bellini on the cocktail list.

Sure enough, when the food arrived, it was excellent and clearly prepared by someone who knew what they were doing. I opted somewhat hesitantly for a spaghetti carbonara – risky when unknown, as it can be turned into a solid lump of pasta and congealed cream all too easily. But this was light and in moderate portion, with decent pieces of what looked like hand-cut pancetta giving an excellent smoky-salty hit. My wife’s aubergine rigatone siciliana was equally excellent.

I pined due to the lack of pannacotta on the desert menu, as this is always an acid test of an Italian eatery – but a piece of tiramisu gateau was a reasonable substitute, even if it lacked totally in liqueur content. The follow-up espresso was of a good size, though somewhere up Mont Blanc in terms of strength, not quite fully Italian and missing the accompanying glass of water. But these are minor niggles in what was otherwise a surprisingly good experience. What pleased me too, was the fact that the place felt right.

It was only when I got home that I discovered that Concerto is a chain – at least within the bounds of London, there being about a dozen more dotted around the capital – plus one in Birmingham. But I think it shows that control has been retained by people who know what they are doing, by which I mean serving up a good Italian experience rather than making money for some anonymous venture capital company. My other favourite, Carluccio’s is just about managing the same trick, even though Antonio relinquished day-to-day control some time ago. That said, a look at the website shows the full corporate infrastructure behind the thing. Perhaps it shows that chains do not have to be dumbed down and characterless.

So on the one hand, it would be nice to see Caffé Concerto spreading to places that did not involve hauling into the capital, but on the other, what risk that it would do a Costa, be bought out by big business and turned into a shadow of its former self, whence everyone except the investors lose out? Quite a dilemma.