Having been born a westerner, to me the coast always meant towering cliffs and rocky outcrops with crashing waves or at least a decent swell. By contrast, the eastern coast of England is deeply uneventful, as the land (sometimes literally) slips apologetically into the sea. On this side of the country, you have to go to Yorkshire before anything more dramatic happens. I recall looking at maps of the country as a child, and thinking that the bit of the coastline north of London looked particularly untidy, before it sorts itself out north of Ipswich into the distinctive bulge of East Anglia.

The sea (well, the nearest salty inlet) is a mere ten miles from my home, and yet much of Essex feels distinctly un-coastal. By a strange fluke of geography, the country actually wraps itself around its coast, so that you can travel a good forty road miles, approach the coast and find yourself looking across at a place not very far from where you started. But if you add up the total length of the salt marshes, inlets and creeks, it adds up to the longest (salt-water) coastline of any county in England.

It’s a chaotic landscape of salt marsh, mud flat and low-lying islands, some of which can be reached by causeways at low tide. It’s also one that human activity has done its very best to mess up further, with a legacy of jerry-building extending from some of the earlier fishermen’s sheds by way of oil refineries to acres of sprawling mobile home camps clamped desperately around little apologies for beaches, which for most of the time lead you not so much to water as vast expanses of mud. The recent addition of off-shore wind-farms tames the scene further, though I must admit an admiration for those graceful and slightly surreal structures, which I think are at least an improvement on Shell Haven refinery. I suppose if you grew up in Tower Hamlets, it’s a welcome release. Yet, over the years I have come to appreciate that it does have a rather melancholy atmosphere of its own.

And it does yield bounty, even if one might have reservations about the water-quality of the North Sea. Mersea Island near Colchester has been the source of oysters since Roman times, while further south, Maldon’s marshes are home to a particularly fine sea salt. The area is internationally recognised as a sea-bird sanctuary, and I have seen seals just off the beach at Walton on the Naze.

I do wish, however that more had been done to prevent the particularly sad kind of sprawl that I mentioned earlier: it takes a lot to see even a little of the picturesque in the rows of caravans, and blingy housing estates. So it was pleasing yesterday to walk out past Maldon to the beginnings of open coastline on the way to Goldhanger. A cold wind was blowing in off the sea (special delivery from Norway) so it was wrap-up-warm weather. We (two former colleagues and I) headed for what passes as a headland where a set of rather unusual-looking structures could be seen, and not far from where we knew there was one of the excellent Tiptree Tea Shops. These have spread in recent years to become a much-appreciated highlight of the more visit-able places in this ambivalent county. They are the creation of another eminent local concern, Wilkin Jams of Tiptree (by Royal Appointment), and they serve excellent lunches, cakes and cream teas. 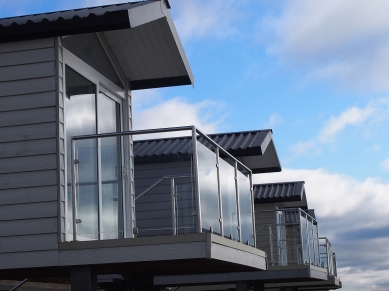 The structures, built by Osea Leisure Park, turned out to be a modern take on traditional Indian Ocean beach hut no less, a line of ten in contrasting pastels, perched on stilts and just 20cm above the water at high tide. They were designed to have minimal impact on the protected beach beneath. It’s pleasing to see some genuinely innovative, high quality architecture being put into such a place – even if the cost of purchasing one, around £25,000, means it’s hardly a democratic gesture… 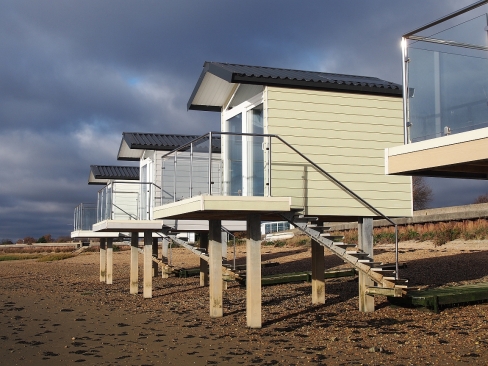 The nearby tea room offered a refuge from the wind, and served up warm drinks and cakes before our return to the cars at Heybridge Basin. Looked at from the right angle, it could almost have been somewhere much more romantic, even a little Arthur Ransome. Just shows what a little imagination can do to the way humans intervene in even relatively mundane places.

2 thoughts on “Modernism on a marshy coast”