It sometimes seems as though aesthetic tastes are expected to be mutually exclusive, but this needn’t be so. For example, my tastes are resolutely modernist, but I am still perfectly capable of appreciating the ‘old stuff’. My only reservations are that the styles of the past are in effect dead, and while old buildings, for example, clearly endure into the present, there seems to be to me little point in replicating them when there are so many more opportunities offered by the styles and techniques of the present day. So what I really dislike is fake-old, pastiche attempts to recreate past styles that rarely work even when carefully done.
Harriet’s however, treads an admirable line between its relative youth and the ambience of a very glamorous yesterday.
This is a small chain of three tea rooms in Cambridge, Norwich and Bury St. Edmunds (in eastern England), the last of which is the original. Conceived in the mid-1990s and opened just after the millennium, Harriet’s revives the lost era of grand tea rooms. The Bury branch is by far the grandest, set in the neo-classical Cornhill buildings dating from around 1900, it has high ceilings, splendid chandeliers and often features live piano music. Unlike so many recreations, no detail has been spared: the marble table tops and the Thonet bentwood chairs are the real thing; the staff are appropriately turned out had have clearly been properly trained – and even the toilets are done out to the same high standard – always a good sign. The introduction of the usual modern cash-desk technology is very unobtrusive. Likewise, the food and drink on offer is of a high standard, the highlight perhaps being the very attractive macaroons.
However, what makes it most successful is that it does not feel like a pastiche, despite being less than twenty years old. What’s more, the populace of Bury seem to have made it their own, with queues for tables at weekends. Once inside, the ambience is, I assume very much what a grand early twentieth century tea room would have been – though I am also reminded of some the great cafes of the continent, such as the Cafe Central and Cafe Sacher in Vienna. The room hums with quiet conversation, and the place is enough of a spectacle to be able to carry this – there is nothing fake about the result – it has become a genuine ‘society’ spot in the centre of Bury.
In fact, the chief sadness is that so many of the original tea rooms were closed in Britain – had they not been, they might have represented the continuation into the present of a tradition similar to the cafe culture that has never died out on the continent – and for which the modern, themed chains that we mostly now have in the U.K. can only ever be the palest of imitations. 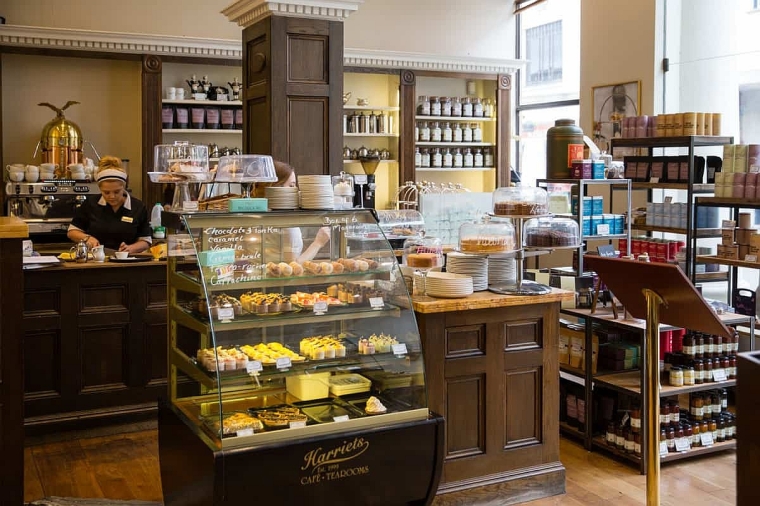