There’s nowt like a bit o’ hardship to make you appreciate the good life… which, as I’ve written before is, in a way, where Sprezzatura came from. When your back is against the wall, it certainly does make life’s more pleasant experiences seem all the sweeter, even if (or perhaps because) they may presently be unattainable.

England’s North was built on such prospects – though it’s of course debatable whether shares in muck and brass were distributed as fairly as they should have been. Our first stop outside Leeds was Saltaire, a short train-ride away. Now a World Heritage Site, Titus Salt’s model village is one of Britain’s better-known examples of Victorian philanthropy: appalled by the general living conditions of the time, the wealthy mill-owner built a residential quarter for the thousands who worked in his immense premises next-door.

It is difficult to imagine how the neat grid of stone cottages was received by those who lived in them; much is made of Salt’s munificence – but I found myself mulling the contradiction set up by the knowledge that for many in Victorian times, the most basic elements of a decent life were almost completely at the discretion of private individuals – who in many cases did not care as much as Salt apparently did. But with the improved conditions came a dictated, morally-upright way of life (down to the number of baths one was required to take). Salt himself lived in considerable grandeur, with a private entrance to the mill. The work for the rest was still hard; egalitarianism, this was not.

There is also an irony, however, in that the Trades Unions which were a response to Victorian conditions would presumably have been quite happy to see Salt deposed from the position in which he was able to administer to his flock. Would that have been a victory? I think in the long run, people’s wellbeing should not rest on the discretion of more powerful others, and listening to the views of certain political figures even today, it is not clear that such lessons have been learned even now.

But we should still be careful not to cut off our noses to spite our faces.

Saltaire today is a slightly strange assemblage of Italianate and other buildings somehow rather too grand for their rural setting. It works, but still feels somewhat contrived. The vast mill itself is now a combination of business units, apartments, shops and a gallery largely devoted to the works of local artist David Hockney. His ‘The Arrival of Spring’ series, drawn on iPad and turned into large prints was an interesting and likeable expression of the creative potential of digital media.

Much of the nearby town seems contentedly inhabited, and there are a number of the chi-chi galleries, craft shops and cafes that tend to cluster in such places. Nowadays, it’s the strictures of listed building and World Heritage status that are the overlord. It’s all quite pleasant, if a little self-conscious.

We moved on further up the Aire valley, to Keighley and thence by Worth Valley steam train to Haworth, another famous location that majors on high Victorian drama. When it comes to dour Victorian novels, I very rapidly find that a little is too much, but the home of the Brontë sisters is picturesque – another place that I hadn’t visited for many years. All along the valley, the harshness of the industrial decline that rather horrified me when I first visited as a child is being mellowed as buildings are re-purposed and the profuse greenery returns. Some may yearn for the days of heavy industry, but in my eyes the removal of so much polluting harshness is a (qualified) good thing.

Haworth too is rather overdosing on Victorian sentimentalism these days – nearly every shop seems to be some form of nostalgia-laden giftware emporium. But again, I suppose one shouldn’t scoff – they are, in the end, a means for locals in an area that has seen its share of hardship, to make a living from the million visitors it receives each year… In general though, I have many reservations about the still-strong tendency in this country, to wallow so heavily in the past. We all know where that world-view has led, which may only restrict opportunities in the future…

The third stage of the trip was by bus over the moors to Hebden Bridge. The rather cringe-worthily-named ‘Brontë Bus’ turned out actually to be bright and modern, with USB sockets and satellite tracking, and it was interesting to do the circuits of the distinctly non-tourist parts of the area – many of which do look much better cared-for than last time I visited. I suspect that there is a fair amount of commuting to Leeds and Manchester now taking place.

That is certainly true of Hebden Bridge, which we reached after a pleasant bus-borne amble over the moors. This small town of 4500 has become famous as the ‘least cloned town in Britain’. Again it is picturesque, helped (when not being hindered by flooding) by its dramatic location deep in the valley of the Calder. The Rochdale Canal runs through, and the Pennine Way long-distance footpath is nearby, both of which no doubt feed tourism.

But the town’s main claim is the assertive localism of its residents, many of whom are creative types who came here in the seventies when property was cheap, and inadvertently turned the place into a kind of eco-mecca and focal point for the LGBT community.

The town centre has been sympathetically restored, while the presence of both an independent cinema and a highly successful arts venue are somewhat unexpected. Swanky interiors shops suggest that there is money around. Lessons can be learned for my own small town in Essex, which is of a similar size and which equally needs to seize the initiative for its own destiny at a time when the pressures of large-scale commercialism are taking their toll. 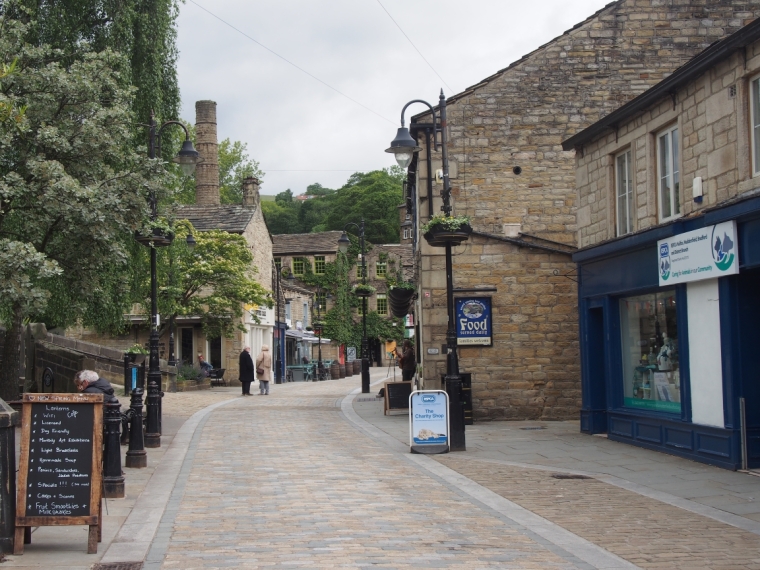 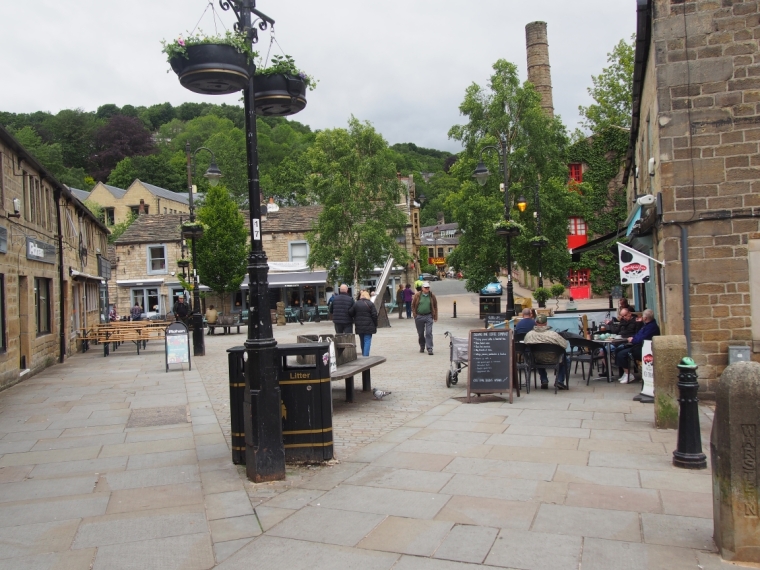 A different kind of enlightenment from Saltaire? Certainly: this is one that is self-directed, even if the actual mechanisms by which Hebden has come to thrive are not entirely clear, intentional or controllable.

Maybe that is the secret of a genuinely good life?