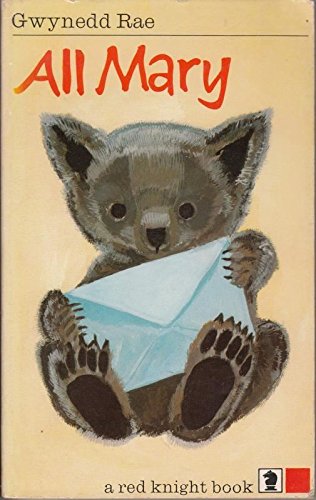 Mary Plain was a small bear. She lived in the Bear Pit in Bern – at least in the imagination of Gwynedd Rae, who wrote her children’s stories in the 1930’s, and which were a youthful favourite of mine. She has a lot to answer for.

Every time I pass through Bern, a necessary ritual is to go and say hello to Mary’s descendants. The bear pit as drawn in the books was quite accurate: a pair of round, sunken stone compounds, with various (rather denuded) trees for climbing, a large bath and sleeping quarters at the back. As I child, I was delighted to see that you could indeed buy carrots and sugar lumps to feed to the bears.

We made our latest visit a couple of weeks ago, on the way back from Lausanne to Basel, when the city was looking especially mellow in the late-afternoon glow of a sunny September day. Pleasingly, the Swiss have moved with the times when it comes to animal welfare, and in a neat reversal, the original bear pit is now an exhibition space and gin bar containing humans, while the bears roam a much larger and more naturalistic enclosure outside, on the steep hillside leading down to the river Aare. Now the trees have grown, however, it is much more difficult to spot them…

Despite its being their capital, amongst the Swiss the Bernese have a reputation for being slow and lumpen. (“Why shouldn’t you tell a Bernese a joke on a Wednesday? Because he might laugh in church on Sunday…”). On the train into Bern earlier in the day, we had an impromptu conversation with a not-at-all lumpen young Bernese man, who was returning from visiting his girlfriend in Basel. He told us, though, that he does indeed like Bern because although it is the capital, “it is just like a large village”. But it still has some pretty swish quarters, if my experience is anything to go by, of the one where, a good many years ago I once went to a rather smart party. Even if it did go by the name of Bümpliz…

There can be few capital cities where you can see wooded hills at the end of the main street (and on some days snow-capped Alps too), and yet at the same time indulge in a spot of serious shopping or eat at a top-notch restaurant (avoided, given the distinctly non-provincial prices…). Bern has a wonderful character, and as with the other larger Swiss centres, its conservatism is pleasingly spiced with a noticeable undercurrent of trendy urban rebellion. It is a place that moves slowly and deliberatively, but always with its eyes on the future.

The centre of the city lies on a neck of land surrounded by the deeply-incised valley of the Aare, giving a dramatic setting, the main streets gradually sloping down towards the sharp point of the meander, while both road and rail routes are forced to approach over dramatic high bridges. The outer sides of the valley are scattered with desirable villas, while it is possible to indulge in a spot of river swimming here in the city centre, as in Basel. Topographically, the city has a superb natural arena. 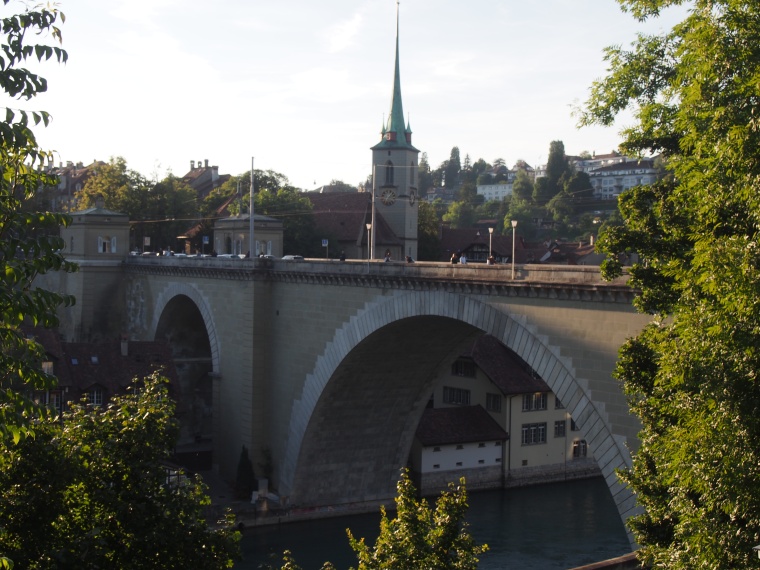 Many of the timeless buildings have decorated shutters, and are built from a sandstone that is a particular shade of mustard-green that seems to be found nowhere else. Quintessentially Swiss. It goes without saying that the public transport is peerless, even if the main station was rebuilt in the seventies in the style of Birmingham New Street. Here, twice an hour, inter-city trains from all over Switzerland draw up at adjacent platforms so that easy interchange is possible from almost anywhere to anywhere.

We love the arcaded streets, a larger version of those all over Switzerland which were, of course, never flattened by the ravages of the Twentieth Century. It’s all original. The old clock tower and the square outside the parliament building are straight from a fairy tale; visiting them, on the way to the bears, is another ritual. Even more than elsewhere in Switzerland, the shop-keepers seem to take a pride in making the most attractive window displays imaginable, which promise to turn the most mundane of purchases into a super-stylish adventure. I decided to make a small photo-survey of some of the present ones – see below. 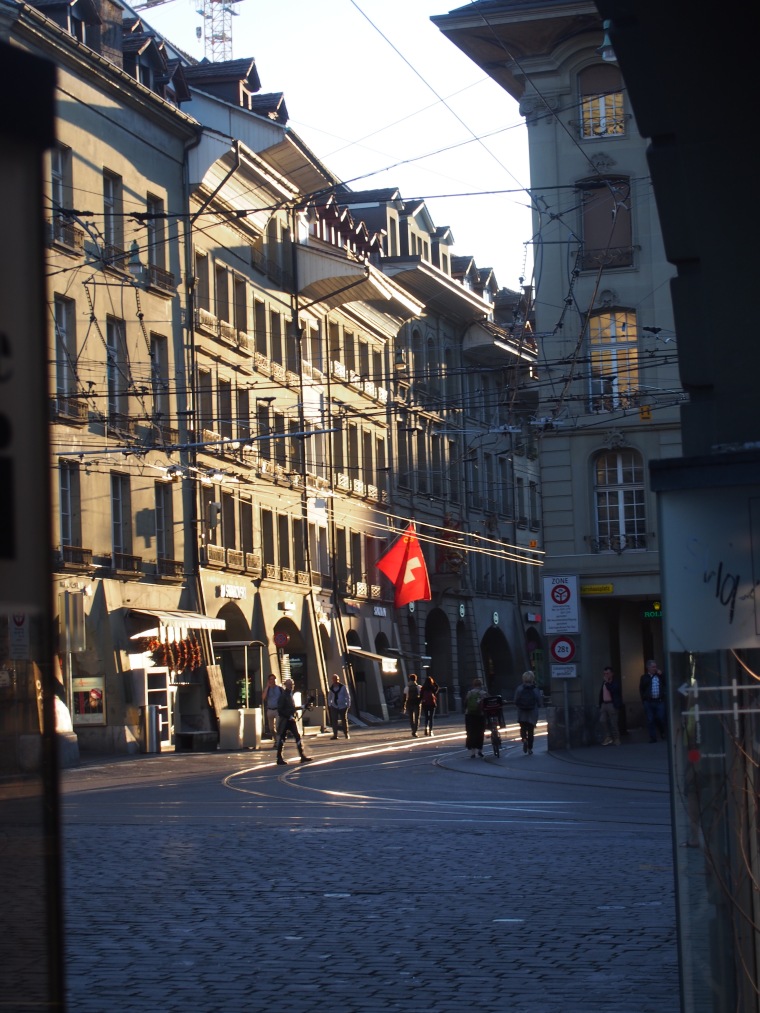 I like the scale of Swiss cities: I know exactly what the young traveller meant: it is a capital built on a very human scale, just as Switzerland is a nation built on an equally human scale. Ironic really, considering the physical grandeur all around. Maybe the ever-present mountains give the Swiss a sense of their own, human, insignificance?

My amusement with Bern’s slowness got its own back, however. As we were leaving the station, I was stung by a wasp. Being Bernese, it moved slowly enough that I was able to bat it away before it did its worst. But it left its venom to work a very gradual inflation of my right arm over the following two days, which then lasted a good week. Even the smallest inhabitants know that slow and steady brings results that are both progressive and unchanging over long periods of time.

I like Bern precisely because it feels both thoroughly modern and timeless. Thanks to Mary Plain, we have come to know quite well another Swiss city which subtly, perhaps unintentionally, drives home all that could be so much better about the life that, inexplicably, one has to live somewhere else. 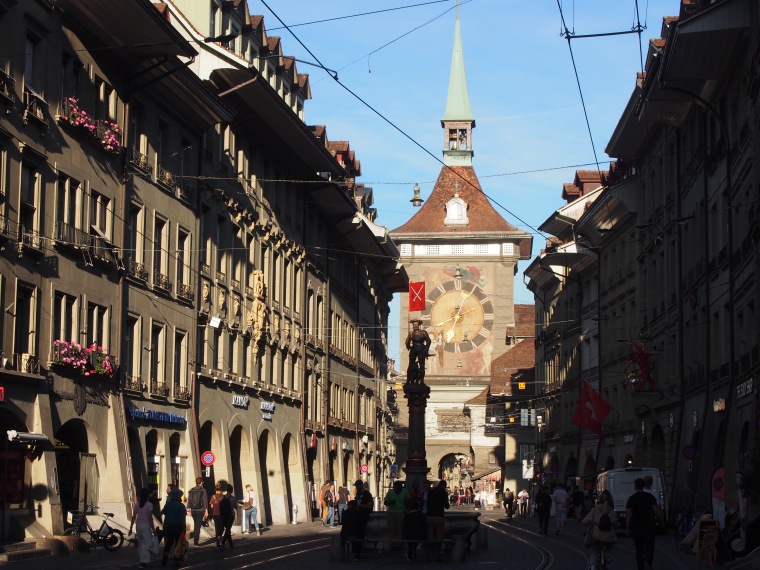 Below: a short photo-study of Bern’s shop windows… 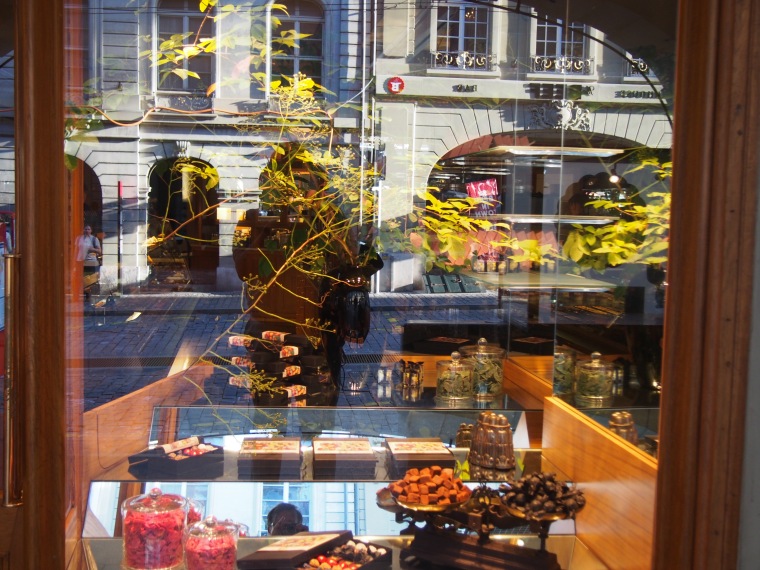 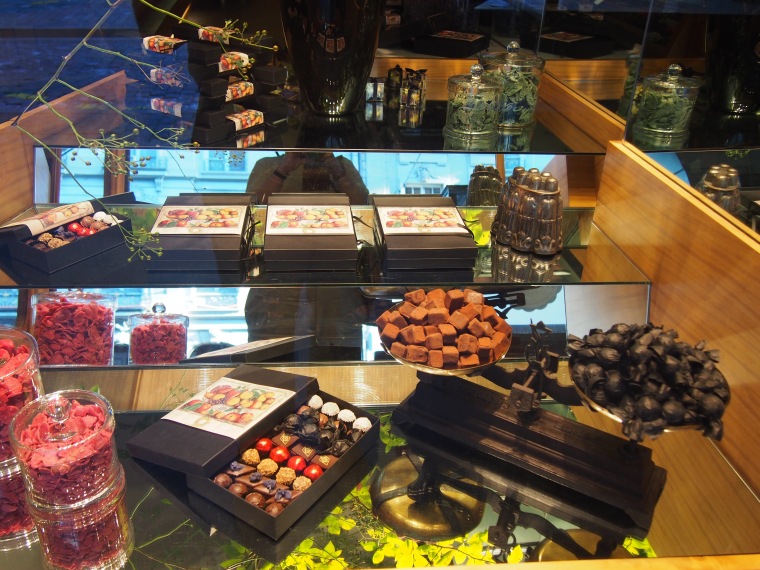 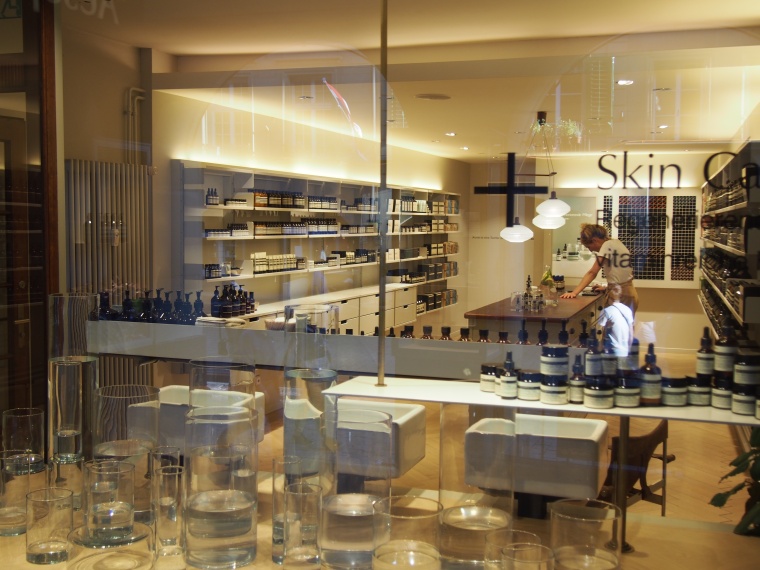 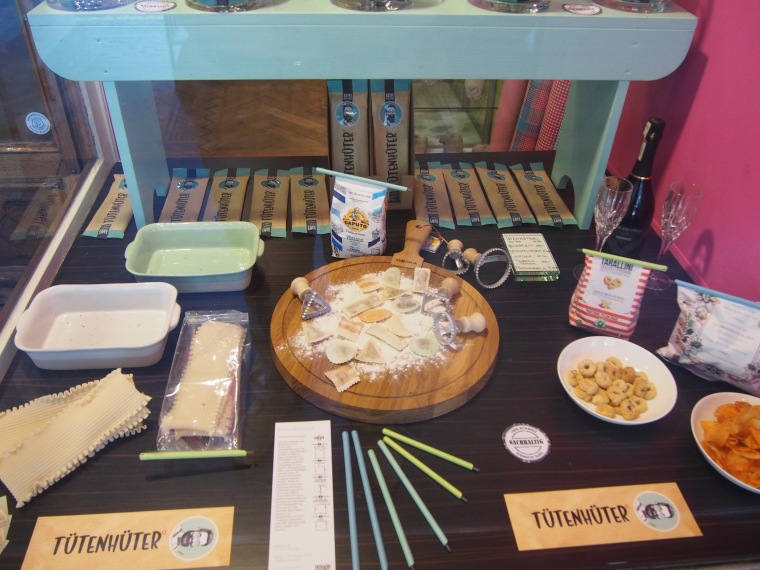 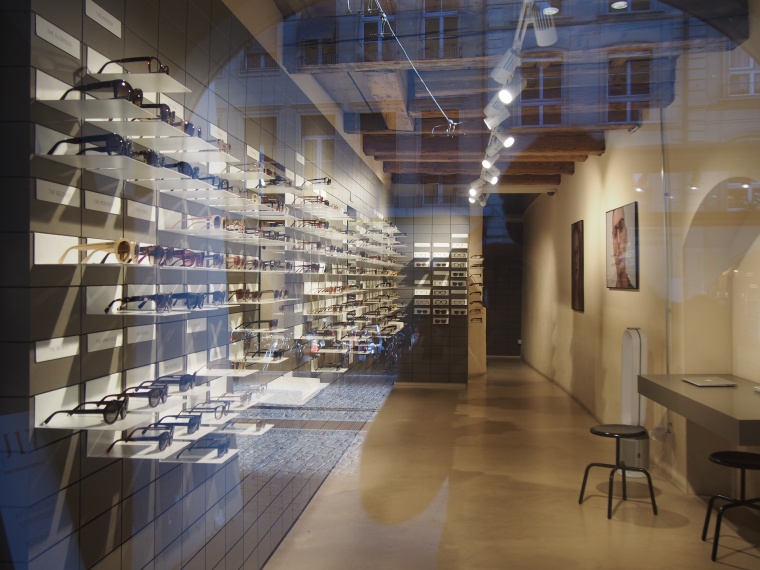 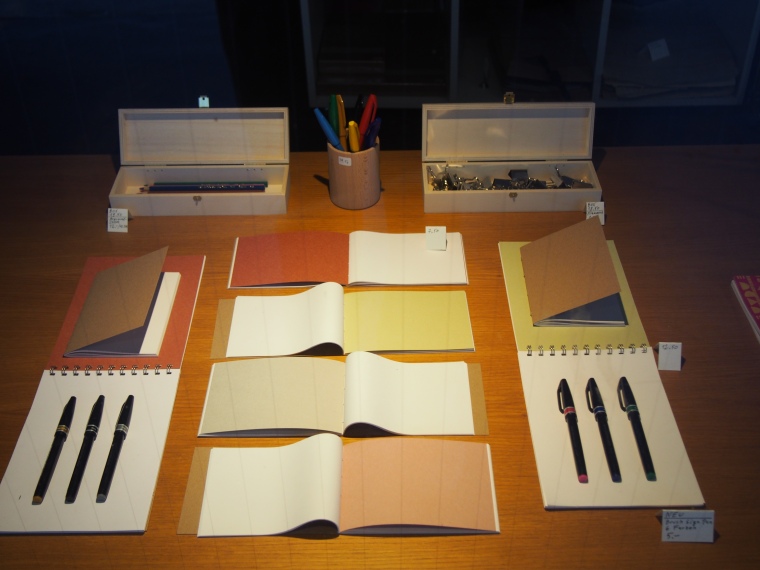 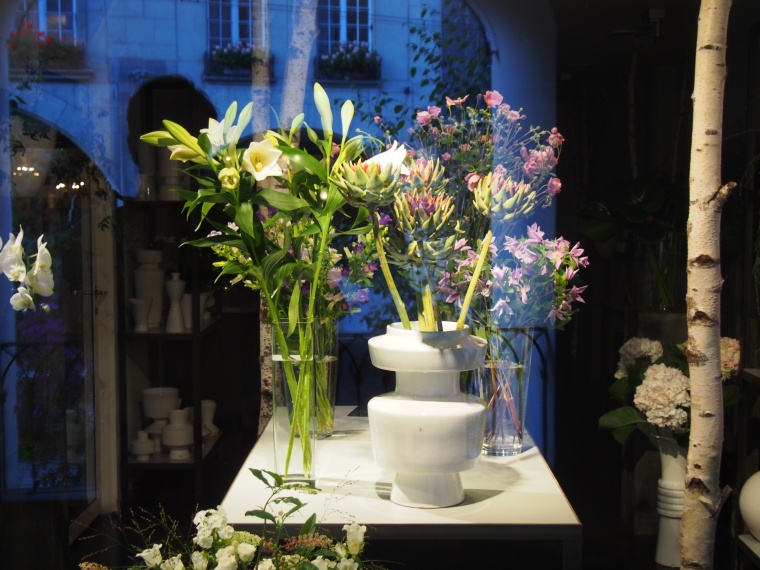 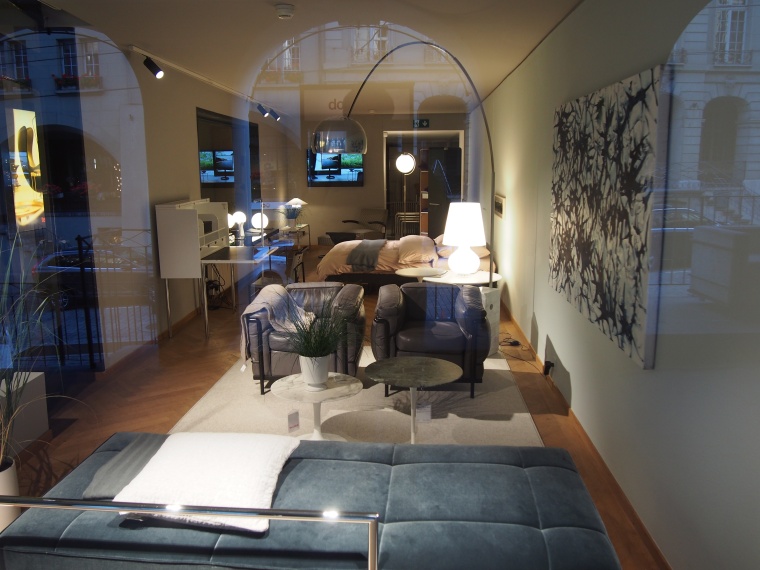