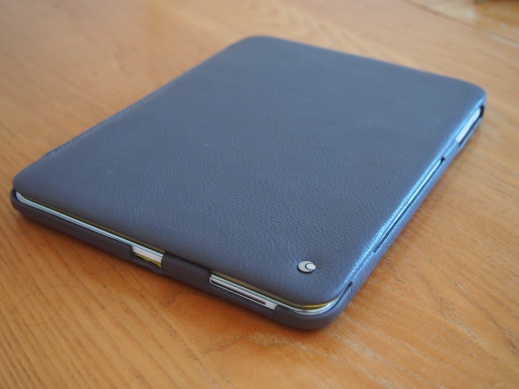 Some months after my wife bought one, I eventually yielded to the temptation of a tablet computer, the main reason being a wish to cut down on the amount of recycling generated by my rather sizeable magazine consumption. I’m happy to say it worked – but I felt that if I was going to be spending quite a lot of time with that item, it deserved to be done properly. In particular, I like a book that I am going to be holding for a lot of time to be pleasingly tactile, and I didn’t see why a tablet case should be less so. One can also add that a tablet is both more fragile and more expensive than the average book, and so perhaps needs a suitable case all the more.

The official Samsung case came in at about £50 and was only available in a very limited range of colours and finishes, so I  hunted through the hundreds of cases available online. Most were surprisingly cheap; I eventually bought one that looked promising. It started well, but inside a month, two of the clips holding the tablet in place had broken, and there were signs of further imminent deterioration. So after another considerable hunt, I bought a slightly more expensive replacement. This lasted rather longer – but it had several design flaws, not least the inability to charge the tablet with the cover closed – and it too soon started to deteriorate. At this stage, I also found out that ‘PU leather’ is a euphemism for polyurethane and is, in my view pushing its luck with trade description law. Time for another re-think.

Next I bought a Danish-designed leather cover – albeit made in India. This would have been quite costly had it not been an end-of-line model. It was better on the tactility front, but it turned out still not to permit case-closed charging, and after a few weeks, the ridges against which the open cover rests came loose inside its lining, meaning the tablet would not stand up properly.

Further searching – and eventually I landed on the Noreve website. This company specialises in what it calls ‘haute couture for devices’ These covers are hand-made to order in St Tropez no less, from top-quality leathers, the colours and finish of which can be specified on ordering. They have a small range in stock, and there is a wait of about two weeks for a made-to-order specimen.

As always, I staked out the website for several weeks until a sale came up, with a significant reduction on offer; I pounced. The case eventually arrived, not only well-packaged, but also in its own box and cloth travel-bag. Très chic. The claims made by Noreve are not over-stated: the case grips the tablet firmly but unobtrusively, and it is still possible to remove it when needed; strong magnets hold the case closed without the need for a strap. All of the function ports are fully accessible and the material finish is beautifully tactile – rather akin to holding a leather-bound volume in one’s hands. The experience of using the tablet is significantly enhanced as a result. My only criticism is that there appears to be no magnetic auto-off function when closing the case. 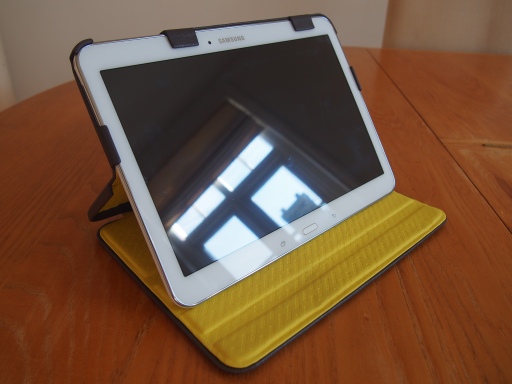 Six months later, Noreve emailed me asking if I wanted to replace the case with a new one; it was very tempting to reply by asking whether they were expecting the original to have fallen apart, not that there appeared to be any chance whatsoever of that happening. Indeed the case is just starting to loosen up and mellow nicely.

Judging by the prices of other goods on their website, I suspect that many Noreve items are bought by those who can afford to treat them as disposable – which I most definitely cannot, neither would not wish to. Judging from progress to date, this will last many years – and as it is what I had had in mind to begin with, there is going to be little temptation to change. Some may be interested to note that they also provide mobile phone covers for a vast range of phones, as well as specs cases and other niceties.

The £75 I paid for the case was about 50% higher than the Samsung one, and about the same amount more than the total cost of the several failed cheap efforts I had purchased to begin with. But I expect this to last many times longer and therefore justify the outlay.

Moral of the story: always follow your own advice and buy the best you can afford to start with.

Noreve products are also available from third-party suppliers including Amazon, though in limited styles and not to order.