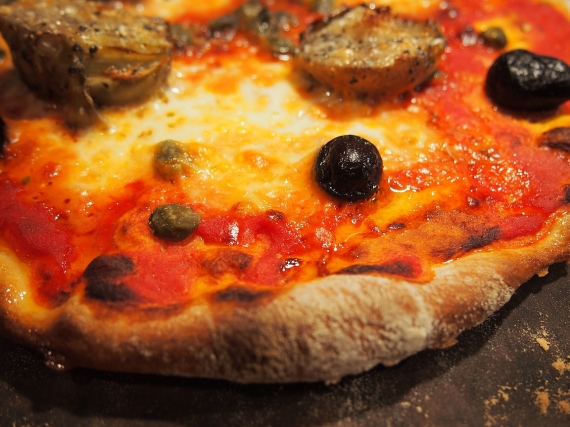 The second of my small-but-satisfying life quests involves another staple of the Italian diet: pizza. I am trying to think of an equivalent in the English gastronomic lexicon to pizza in Italian. I suppose it has to be fish and chips really, but I don’t think there is the same potential for complexity in that dish, even though really fresh fish (i.e. just off the boat) makes a noticeable difference. Chips are something my life can generally do without, sacrilegious though that may be to many.

Quite apart from what the perfect pizza actually is, there are numerous challenges with making one. Being by instinct a purist, I tend to think that the Neapolitans really should have the last word, and one really needs to have eaten a simple margarita in that city before one can judge. I pass that test.

I really don’t go for all the abuses of pizza either, mostly at the hands of the Americans. Stuffed crusts and the rest of it utterly lose the whole, glorious simplicity of the thing and suffocate it under pure greed. It is meant to be simple!

But like so many such things, that simplicity masks the art of doing the thing properly. I have spent three decades working on my technique, and cringe to think of my first efforts, taken from a 1970s student cook-book, that used tomato puree and instead of an oven, cooked the thing in a frying pan on a ring before finishing it under the grill… Thankfully we have moved on from those days.

I think it is important to accept the inevitable: unless you have built an oven in the garden, or have bought one of these new-fangled things, http://www.lakeland.co.uk/53090/Uuni-3-Wood-Fired-Outdoor-Pizza-Oven-with-Baking-Stone home-made pizza is always going to be a compromise. There is no way to reproduce the very particular effect of cooking in a super-heated wood oven other than doing it that way. Likewise, the fact that a pizza should cook in about a minute at 500- 600 degrees is never going to be reproduced in a domestic oven. The dough just does not behave in at all the same way at lower temperatures.

But I think it is possible, with care, to produce an acceptable result.

Friday night is pizza night in our household. It starts at about 5.00 pm with my wife making the dough. We use OO grade pasta flour, which can now be had from the local supermarket. This is extra-strong and makes a huge difference to the base. Using fresh yeast is also important; it’s not easy to obtain in the U.K. We used to scrounge it from a local baker until he closed, then our Swiss friends used to ‘import’ it for us. We have even resorted to buying it by mail from France, but now source it from a company near Bath. Getting the dough wet enough to be elastic without being so wet as to just collapse on itself takes practice, and every time is still an adventure…

The dough is left to rise in a slightly warm oven for a good couple of hours before being brought out to finish, while the oven heats. We bought the hottest domestic oven we could find – a Neff, specifically for this purpose. We can get 275⁰C out of it, further boosted by the use of pizza stones.

I then second-knead the dough and leave to recover while preparing the toppings. Passata is a better base – as often, much less is needed than expected, little more than a smear-covering. Toppings need to be simple: my wife usually has artichoke hearts, olives and capers, while I prefer mushroom and olives, with prosciutto ham added after cooking. In the summer, we add home-grown oregano and basil. It’s not worth using buffalo mozzarella on a pizza.

The dough is pushed and tossed out to a thin disc, and pushed out a little further to form a rim once on the stone. I tend to prepare the pizza directly onto the hot stone, which is easier than trying to shift it all across once assembled. The finished think normally makes it to the table by about eight: some fast food!

It’s not quite the full traditional technique, but as I said, it is necessary to accept certain adaptations to suit the circumstances; the result is very acceptable, despite its deficiencies. I think we are pretty much as close as we are going to get: it has only taken thirty years of very satisfying experimentation to get there… 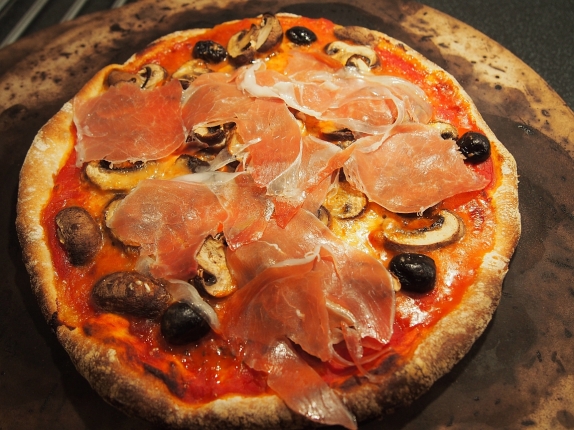