It is often the little things that lift daily life beyond the mundane, and as I’ve written many times eating well, for me, comes pretty high up in that. But doing so depends on being able to source good-quality produce, hopefully without a major trek from home. Good food is always worth the effort – but having it close at hand is hardly unwelcome…

I’m very fortunate that my small town still has a market every Thursday, whose charter dates back to the 13th Century. Within literally one minute’s walk of my front door, I can buy excellent fish, meat, bread, cheese and vegetables – and that is in addition to the local independent food store that we still have. Pleasingly, while the food on offer is diverse, the market itself still has its feet firmly on the ground.

One of the highlights for me is the cheese stall. Martijn Knap  is the owner of The Cheese Wheeler, a motorised Dutch cheese counter that can be found at a number of markets across the northern Home Counties in the course of a week. Martijn is a distinctive character, whose past life has included a stint in the Dutch National Ballet, various top-ranking shows on both sides of the Atlantic and restaurant ownership in London. He also runs a gym. But his best asset so far as I’m concerned is definitely his cheese stall.

This man has unintentionally done much to educate me in the appreciation of cheese, as he stocks many types that I had not encountered previously, from all over the U.K. and Europe. He chooses his suppliers carefully. I am now an afficiado of the various tommes – Savoie, Provence, Pyrenees and more, as well as Vacherin (only seasonally available), Munster and Epoisses, not to mention lesser-known (here) Dutch cheeses such as boerenkaas. Satisfyingly, like many foodstuffs, done properly there is a lot to know, which you will never pick up from a supermarket chiller-cabinet.

Martijn has a wide range of goat and sheep cheeses too, and we live in the knowledge that the raw materials for fondue or raclette are reliably available just round the corner on a weekly basis. Parmesan cut freshly from a round is so much better than shrink-wrapped supermarket offerings. Apparently, British supermarkets often receive the cracked cheeses cut and packaged, that no self-respecting cheese-aware Italian would even contemplate…

Sometimes there is excellent fresh mozzarella from a dairy in London, and occasionally even fresh ricotta. And around Christmas he also has a fantastic range of terrines and pates. I could go on, but I will start feeling hungry.

Predictably, I envy the cheese stalls in continental markets – but with this of all products buying is rather restricted when one is away, since they don’t exactly go well in hand luggage. All the more reason to appreciate little gems like Martijn’s stall when you are lucky enough to have them on your doorstep. 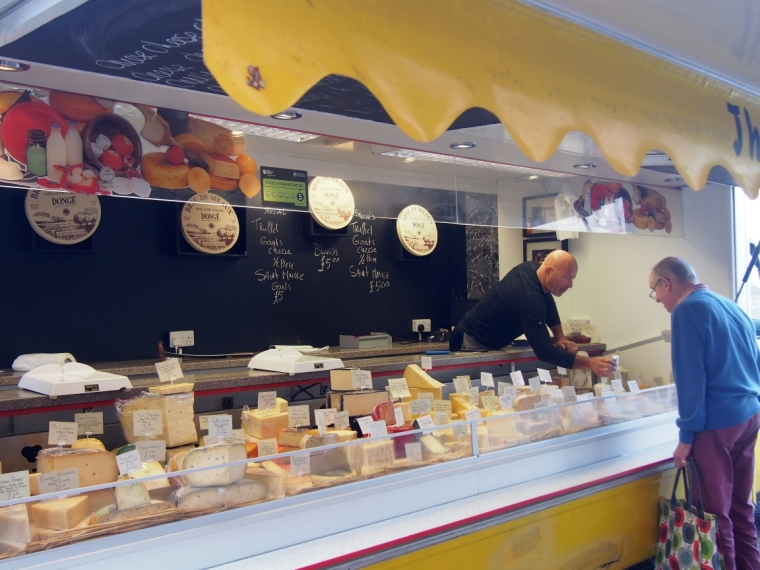